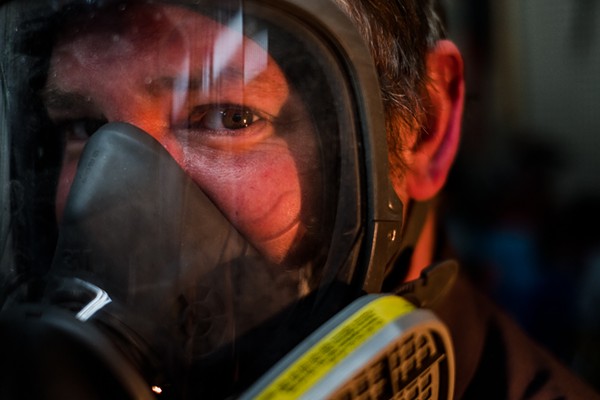 The steel blade that Nate Bonner was forging at his Maplewood knife workshop sliced into his hand with such force and speed he had no time to register what had happened.

He wasn’t even in pain. An injury this severe fails to register the usual “Ouch, that hurts” you get when you slice your finger with a bread knife. His was the sort of trauma so intense that the body shuts down as a form of protection. His only knowledge that something so awful had happened was the way the blood spread across the work glove covering his wounded hand after he pulled out the blade. Bonner remembers thinking how dark it was; the red wasn’t the hue you’d normally expect from a cut, but a dark, almost black color that made him understand he’d severed something too deep to bleed like a regular wound. Disconnected from his body and feeling like he was having a heart attack, Bonner somehow managed to call 911 before staggering to the front part of his studio and collapsing in slow motion against the window, his head resting on the sill as he waited for help to arrive.

Bonner doesn’t know exactly how long it took for the ambulance to arrive at the Maplewood storefront of his business, NHB Knifeworks, but it seemed like they were there within seconds. In and out of consciousness as they put him on a stretcher and then loaded him in the ambulance, he came to enough to struggle against the two EMTs who were trying to remove his glove because he was terrified of what was underneath the mangled cloth. Finally relenting, Bonner looked up at one of the emergency responders and begged him to tell him how bad it was.

“No, man, it’s actually not that bad,” the EMT said. Relieved, Bonner briefly shut his eyes, only to open them in time to see the EMT mouth the words “Oh shit” to his partner. That’s when Bonner began to scream.

Bonner believes DNA carries memory. Though he cannot totally explain the phenomenon, the experiences he’s had, beginning with his earliest recollections, tell him that something deep within him points to a visceral connection to blades that goes far beyond a fascination. Whether using a stick as a sword to wage war against the large sea cliffs near his childhood home in Santa Barbara, California, or always gravitating toward the knife section of his local department store when he was very young, Bonner has not known a moment when there wasn’t some indescribable force pulling him in the direction of sharp steel.

“Ever since I was a little kid, I’ve been fascinated with blades, swords and knives,” Bonner says. “Every time I saw a knife, it was a magnet. Something about them — about finding the largest stick I could find and going to war on these cliffs, the sand and rocks flying everywhere as I attacked them, everything bleached and sandy colored — it just spoke to my soul.”

For the past nine years, Bonner has harnessed this passion through his artisan knife-making business, producing custom kitchen knives and utility tools for some of the biggest names in the St. Louis culinary scene, as well as home cooks and knife enthusiasts around the country. Originally founded as an online shop that sold knives he and his small team assembled from parts sourced throughout the United States and Japan, Bonner grew the company to include the Maplewood storefront. He ran that for three years before closing the shop and recalibrating his business after the hand injury in the summer of 2017 threatened all he had built.

Forty years old and tattooed as you’d expect a former chef to be, Bonner is not shy about the ups, downs, self-doubt, fits and starts that characterize his path to NHB Knives (originally called NHB Knifeworks) — one that is clear in retrospect, but not perfectly straight. As a kid, his fascination grew with each knife he was able to buy or trade for, and he eventually began dabbling in craftsmanship, making ninja throwing stars in the woodshop of a friend’s dad. He knew he had a knack for craftsmanship, but he shifted his focus to art and photography and eventually discovered a passion for food and cooking that led him to the New England Culinary Institute. Bonner excelled in his studies and was invited to stay on as an instructor, where he relished the opportunity to learn from great chefs and share his knowledge with his students. However, as much as he loved the food component of his craft, Bonner was equally thrilled his work involved knives.

“During that time, I really started collecting knives and realized that part of the reason I loved cooking so much was because I got to play with all these cool knives,” Bonner says. “My collection started growing, but also this really weird OCD side came out of me that I’d never seen before. I’ve always been this ‘of the earth’ sort of person, but I found myself polishing my knives religiously with a jewelry cloth, and when a scratch wouldn’t come out, it wasn’t cool.”