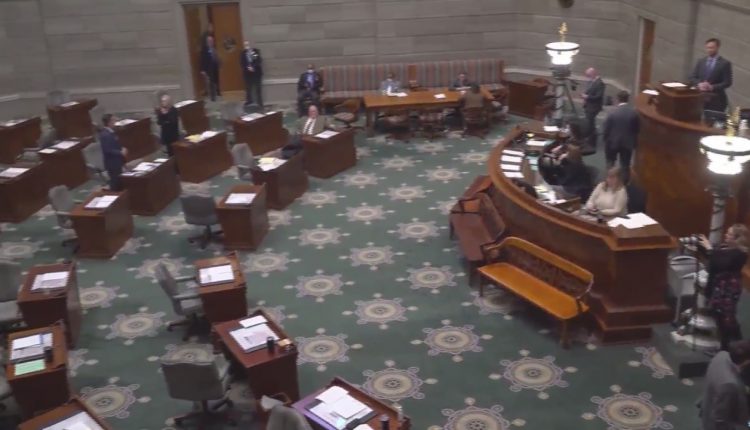 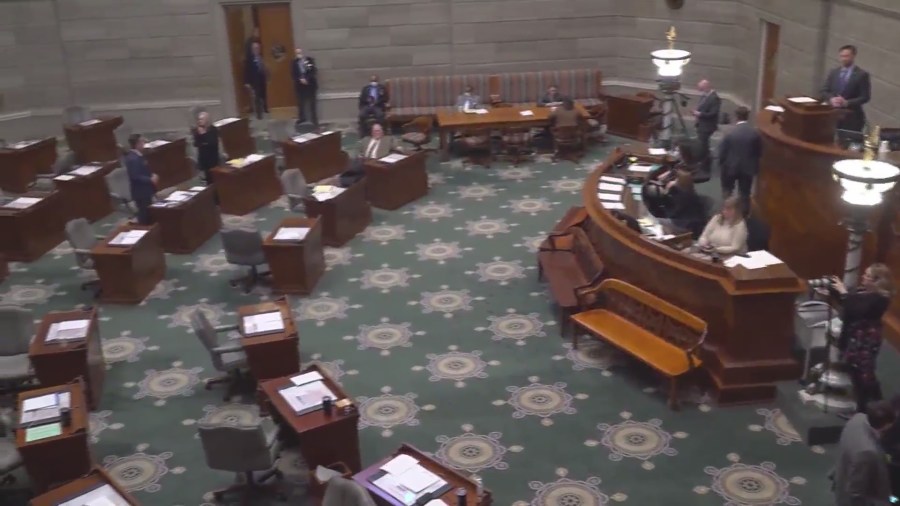 JEFFERSON CITY, Mo. — The incoming winter weather is affecting work inside the Missouri Capitol as lawmakers have the rest of the week off. It’s a break that the Missouri Senate might need after tensions continue to run high.

The Senate has spent days at a stalemate. After moving on from debating how to redraw the state’s congressional map, the strain has carried over into other legislation, leaving some members asking for the personal attacks to stop.

Senators aren’t only stuck on figuring out how to draw a map.

“I could stand here and read books all night long,” said Sen. Bob Onder (R-Lake St. Louis). “I certainly can do it if that’s the way we’re going to play the game.”

Problems within the Republican Party continue to grow, and some members are sick and tired of the fighting.

“It’s never a good idea to attack the person. You can disagree on the issue all day long, but personal attacks are disgusting,” said Sen. Sandy Crawford (R-Buffalo). “We’ve got to get along. We have too.”

Since the start of the session, relationships have been tense. With no solution on the congressional map, Senate Majority Leadership said it was time to move on and focus on other policies like critical race theory, which caused more hardships for the party.

“We can start filibustering the journal again if my colleagues are too nervous and too scared to vote on a critical race theory amendment,” Hoskins said. “If that’s the games we’re going to play, we won’t pass any bill this session.”

Over the last several weeks, we have watched as business critical to MO citizens has been delayed by a small group of senators willing to send our congressional map to federal courts if they do not get districts that suit their ambition. Let us be clear – we will continue to do everything possible ensure a small group of self-interested Senators don’t give left-leaning judicial activities full control over our redistricting process. These Senators are also standing in the way of critical policies Missourians are asking for – election reform, banning Critical Race Theory, providing more choice for Missouri parents, the list goes on. To further complicate the Senate’s task, in the last 48 hours the Missouri congressional delegation has engaged with members of the Senate over redistricting. For the time being, we will step away from this debate on the senate floor. It is my hope that the congressional delegation will work to unify rather than divide and be part of the solution and not just add to the problem. It is past time for everyone involved to put the best interest of the state above their own political ambition.

“I voted to lay it on the table, not because I like CRT,” said Sen. Jeanie Riddle (R-Mokane). “I hate CRT, but I thought that what I was doing was waiting to give us a chance to vet it through a committee process.”

Riddle said she and other senators discussed they want to pass legislation this session to ban CRT in Missouri schools, but putting it on the Fast Track bill was not the answer.

“It’s not that my colleagues want CRT or the transgender stuff, but this bill in itself is a pretty long bill,” Riddle said. “I just want to move forward and do things that help all of Missourians.”

With more than a dozen of Republicans voting against the amendments, problems amongst senators continue to increase.

“That’s how we’re going to play the game, no one is better at playing the game. Then, I am,” Onder said. “We have a lot of things we could do.”

At the end of last week, after more than 30 hours of filibustering from the Conservative Caucus, women in the Senate stood up on the floor and talked about how disappointed they were in other members.

“The definition of insanity is doing the same thing over and over again, expecting a different result,” Crawford said. “That’s what we’ve been doing this week. We haven’t gotten anywhere.”

“I just want fair, fair,” said Sen. Karla May (D-St. Louis). “We get in a heated debate, we say things on the floor in the moment of passion, but I don’t think we ever leave the floor with it.”

“What I’ve seen is all we’ve been doing the last week is really taking care of our own agendas, more so than I’ve ever seen before,” said Sen. Karla Eslinger (R-Wasola). “Last week to me has been the most self-serving kind of work that I’ve ever seen.”

“This is not the path I wanted to go down, but Senator Moon last week, intentionally violated the dress code in the Missouri Senate and basically refused to get off the floor,” Schatz said Wednesday. “He wrote me a letter and said he would accept the punishment that we talked about, but he has no intentions of apologizing.”

Last week on the floor, Moon said he had been threatened by other senators for what he was wearing, which was a suit coat, tie, and blue jean overalls. Schatz said when he approached Moon, he refused to leave the floor.

“I basically said there would be ramifications for your actions,” Schatz said. “It was very offensive to a majority of the Senators in the chamber and also the people who work here and the traditions and the history of the Senate for someone to knowingly and willfully go out on the floor to try and get some sort of a reaction and that is exactly why he did it.”

Moon was removed from gubernatorial appointments, professional registration, small business and industry, and ways and means but was left on progress and development. Schatz said if Moon apologizes, he will put him back on the committees.

By Wednesday night, the Senate had managed to perfect its first bill of the legislative session, Sen. Lincoln Hough’s (R-Springfield) Fast Track Incentive Program. On the floor, Hough said he and Hoskins were able to find a compromise.

Less than 60 minutes later, another bill perfected by senators would cap the state’s income tax at no more than 5.9%.

As for the state’s congressional map, the proposal on the table for Senators is 6 Republican – 2 Democrat, similar to what the state has in effect now. Senate Minority Leader John Rizzo, D-Independence, and Rowden both believe they have enough votes for the map that passed out of the House but haven’t been given the chance to pass it.

Both the Senate and the House canceled the session Thursday due to the winter weather affecting a good portion of the state. Lawmakers will return to Jefferson City Tuesday, after having Monday off for Presidents’ Day.