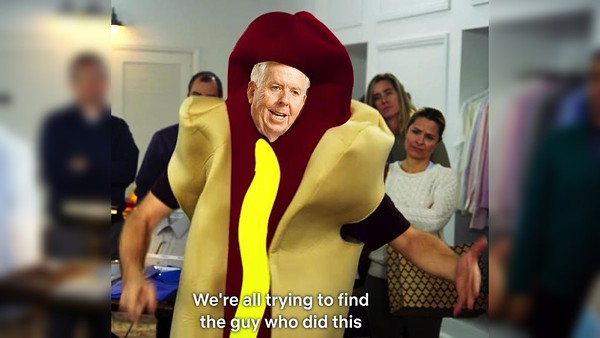 There’s a meme that comes to mind when thinking about Missouri Governor Mike Parson’s clumsy attempt, recently concluded, to destroy the life of a St. Louis reporter over the “crime” of revealing key cybersecurity vulnerabilities — affecting thousands of teachers’ social security numbers — missed by Parson’s administration. That meme, originating from the comedy show I Think You Should Leave, opens with a scene in a retail store where a hot dog shaped car has just crashed through the store’s front window.

As the customers angrily discuss the hot dog car’s missing driver, the camera pans to a new voice in the conversation. It’s a man in a hot dog costume.

“We’re all trying to find the guy that did this,” the hot dog man says.

On October 14, Parson hosted a press conference that might as well have taken place in that skit, with the governor playing the leading role. Instead of a hot dog costume, he clothed himself in the audacity of a lie and called for criminal charges against the person who “decoded the HTML source code” of a state website and “viewed the SSN of those specific educators.”

Even then, the claim was unraveling. Online, a mass of IT experts joked about the absurdity of “hacking” HTML — publicly viewable web code available to anyone — and blasting the notion that it was the viewing of the data was the problem, and not the greater concern, revealed by St. Louis Post-Dispatch reporter Josh Renaud, that a state website was showing teachers’ info to anyone who clicked the page’s source code.

Parson stuck to his script, even when the Post-Dispatch published details of how the state education officials had initially planned to thank Renaud for alerting them to the vulnerability — until Parson decided that Renaud would be punished for the crime of watchdog journalism.

But unlike a meme, Parson’s abdication of truth isn’t a punchline. Real-life investigators in the Missouri State Highway Patrol were put on the case. Prosecutors in Cole County considered filing charges against Renaud, only to announce on February 11 that none would be brought.

Afterward, Parson repeated the lie that Renaud’s actions amounted to a “hack” and said the state would “continue to work to ensure safeguards are in place” to prevent another intrusion.

See, Parson is concerned about justice. He cares when lives are damaged by unscrupulous actors. He definitely knows how HTML works. He is just trying to find the guy who did this.