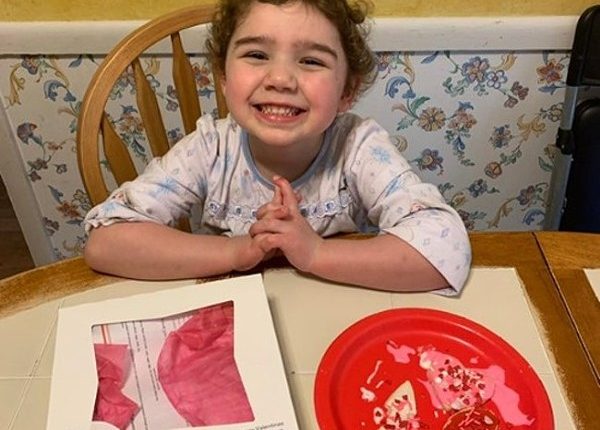 If you’ve walked into a store recently, you likely have seen chocolates, flowers, cards and an array of gifts celebrating romance and love. Valentine’s Day is quickly approaching, and a local nonprofit is working to share the love with families dealing with pediatric cancer.

The Bennett Project, founded by Emily Dyall in 2019, is selling Valentine’s Day-themed cookie kits through January 27. This event is just one way the nonprofit works to support families of children with cancer.

A box full of love

Dyall says The Bennett Project works with Brenda Hernández, owner of the online shop Sweet and Crafty, to make the Valentine-themed sale a reality. Each box is $22 and comes with a dozen cookies, icing and sprinkles.

For each box purchased, another is donated to families served by The Bennett Project. Dyall says this year, the nonprofit’s goal is to collect 40 to 50 boxes.

“A lot of times [the families] can’t go out and do stuff and [the cookie kits are] just something simple that brings them a little bit of joy and keeps them safe, especially with COVID being pretty rampant right now,” Dyall says.

Hernández says The Bennett Project reached out to her about working together a few years ago. Since then, her shop has partnered with the nonprofit for multiple Valentine-themed cookie sales, as well as a “back to school” themed cookie kit in 2021.

“Her cookies are so good that you don’t even have to put frosting on. I’m guilty of just sitting there, grabbing the cookies and eating them without letting my kids decorate them,” Dyall says.

Lisa Knowles, whose five-year-old daughter Delaney was diagnosed with Leukemia in 2019, says her children have received the cookie kits during past sales.

“They love to decorate them and then give them to their grandparents,” Knowles says.

Kathryn Hill learned about The Bennett Project through a mom’s group on Facebook. She says she thinks her three-year-old son, Isaiah Taylor, and his brother Elijah Taylor would enjoy decorating the cookie kit.

On January 24, 2019, Hill sat in Cardinal Glennon Children’s Hospital with Isaiah, who was then six months old. She says she and Isaiah’s father had noticed something wrong with Isaiah’s eyesight, and a pediatrician had referred them to an ophthalmologist at the hospital.

“We waited 30 minutes, and then the doctor came in, barely looked in both of his eyes, and stepped back and said, ‘It’s cancer. And it’s very bad,’” Hill says.

Knowles brought Delaney to her pediatrician after noticing she was pale and less energetic than normal. After being sent to St. Louis Children’s Hospital, Delaney was diagnosed with Acute Lymphocytic Leukemia on Dec. 18, 2019.

Delaney was admitted to the hospital that night because her absolute neutrophil count — a measure of the body’s ability to fight infection — was at zero, according to Knowles. She says Delaney’s count had to reach at least 500 before she could be discharged from the hospital.

Going above and beyond

When Delaney was discharged from the hospital in January 2020, Knowles says, The Bennett Project helped pay for one of their medical bills.

Recently, Hill says, The Bennett Project helped in paying one of her bills. She says the money helped with the cost of the holidays.

Another aspect of The Bennett Project that stands out to both Knowles and Hill is the inclusion of siblings in programs such as the birthday club. Dyall says organization sends the children in treatment and their siblings a birthday card and a gift card on the month of their birthday.

During the holiday season in 2021, The Bennett Project held an in-person Christmas event where parents could pick gifts for their children in one area while children played, made crafts and met with Santa in another.

Knowles says seeing her kids get out of the house and have fun brought tears to her eyes. Hill says, as a single mother, the gifts were a big help and her children enjoyed the event.

“It was a blast and to for it to actually be one of like the first events that we were actually able to go to in so long, they were thrilled,” Hill says.

She adds that The Bennett Project will also offer to pay for dinners or gas when a family is having a hard day. She says the nonprofit springs into action if they hear a family is struggling to pay one of its bills. Knowles also recalled The Bennett Project collecting cleaning supplies and toilet paper for families at the beginning of the COVID-19 pandemic.

The Bennett Project’s responsiveness and thoughtfulness stands out to Hill.

“A lot of people just say, ‘I’m sorry, if there’s anything I could do, let me know.’ And then they disappear. But The Bennett Project hasn’t ever disappeared,” Hill says. “They continue to stand by each and every one of their families in any way that they can.”

For Dyall, helping the families of children with cancer is a passion that hits close to home. Her younger brother, Bennett Reinier, died from cancer in 2003 at ten years old. She says many people on the team share that personal connection to childhood cancer.

“So, we just try to be there in any way that we can. It’s not like one of those [things where] we donate to the families and see you later,” Dyall says. “I like to have a relationship with them, check in on them and see how they’re doing. And know that we care because, in my opinion, they’re like family to us.”

Working as a community

Moving forward, Knowles says Delaney is finishing treatment in February of this year — with plans to ring the bell in March. Even when her daughter’s treatment ends, however, Knowles says she and her mother-in-law, Patti Knowles, plan to stay involved with The Bennett Project.

“Emily has become a good friend of mine. I want to be able to help her. So, I plan on trying to help volunteer as much as I can,” Knowles says.

Hill has helped set up and drop off donations during toy drives. Along with receiving help, she wants to teach her sons the importance of helping the community.

“I’m just happy to be part of this in some way. And definitely, definitely looking forward to keep participating with them,” Hernández says.

Looking back at what The Bennett Project has accomplished so far, Dyall says she thinks her brother would be proud.

“You don’t want their memory to ever die and just kind of keep their name going,” Dyall says. “So, I’m excited for what we’ve been able to do in his name.”