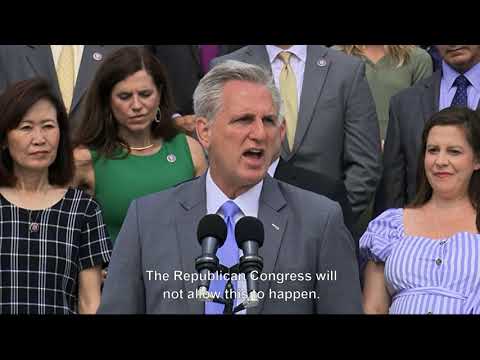 On Thursday, July 29th, after a day of tension on the US Congress floor, House Minority Leader Kevin McCarthy is doubling down on his opposition to new masks guidance on Capitol Hill.

“The CDC has become a political arm of the administration,” said McCarthy Thursday, surrounded by his Republican colleagues in front of the Capitol steps, “It wants to control every element of our life. Somewhere in the middle of that dome, science changes.”

This comes as the CDC cited a new unpublished research that found that fully vaccinated people can spread the Delta variant just like the unvaccinated, putting those who haven’t received the shots or who have compromised immune systems at heightened risk.

The CDC also recommended that all teachers, staff, and students wear masks inside school buildings, regardless of vaccination status.

On Capitol Hill, some Republicans then voiced their revolt after the Capitol’s attending physician sent a memo informing members that masks would again have to be worn inside the House at all times. McCarthy argued that the House was not a virus hotspot, and the new CDC guideline is a measure of “control” rather than a scientific move.

“They can take the nation’s Capitol Hill, and in one building tell you the science is different on one side to the other,” said McCarthy. “They could do the same throughout the nation and they will. The Republican Congress will not allow this to happen.”

As the House Republican questioned the intention of the top health institution, researchers around the world are getting results that could back the new data cited by CDC.

A UK study published last week shows the Pfizer and AstraZeneca vaccines both protect slightly less well against symptomatic disease caused by Delta. This could also mean a drop in how well they protect against transmission of Delta, but there is still a lot of uncertainty, experts said.

Unpublished preliminary data from Israel’s Ministry of Health show the reduction in Delta variant transmission provided by Pfizer jabs is less significant. Moreover, case numbers have risen sharply in Israel following Delta’s arrival, despite more than 60% of the population being fully vaccinated.

This hints at what might happen elsewhere, researchers said.

Up until now, some cities have turned towards reinstating mask mandates to curb the spread of the virus. Las Vegas is now following mandatory mask usage again. Berkeley and Los Angeles have similarly followed suit. Southern cities like New Orleans, Savannah, Kansas City, and St. Louis are now requiring masks in indoor spaces.

A few states, such as Nevada, Washington, New York, and Hawaii, have also followed CDC recommendations and instated state-wide mandates. But experts do not feel optimistic about the future.

“Trying to tell people to mask again is a little bit like trying to put toothpaste back in the tube,” said Carlos Del Rio, a professor of medicine at Emory University.

The US is averaging nearly 62,000 new COVID-19 cases a day, and the vast majority of those hospitalized and dying haven’t been vaccinated. As of Sunday, 69% of American adults had received one vaccine dose, and 60% had been fully vaccinated, according to the CDC.