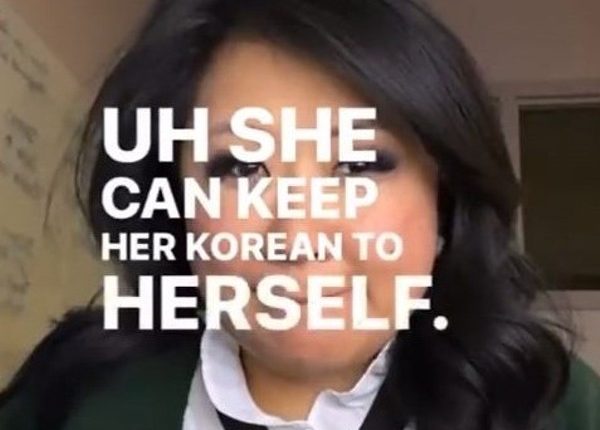 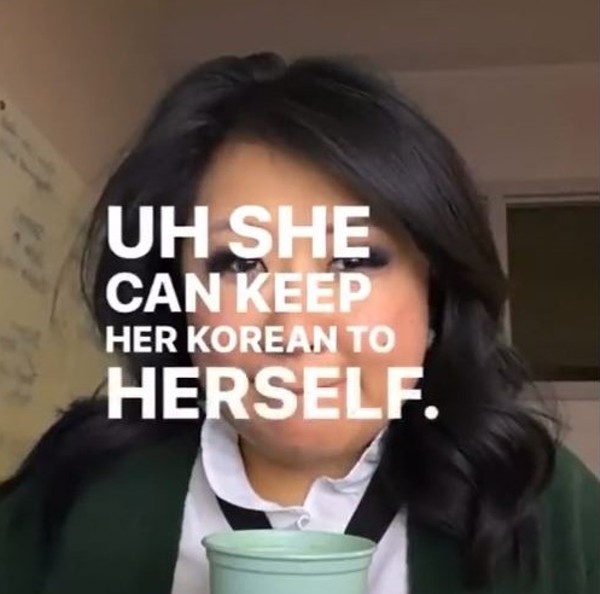 A racist caller’s complaint against KSDK journalist Michelle Li — for committing the supposed offense of “being very Asian” — has become something more than just a viral video fit for internet outrage: Indeed, one day and millions of views later, a video of the caller’s intolerance has launched an outpouring of support for Asian Americans beneath a hashtagged version of the original insult.

Uploaded by Li on January 1, the video shows the award-winning journalist reacting as she listens to a voice mail from someone who claimed they were offended by Li’s on-air coverage of New Year’s Day meals — which included Li noting, “I ate dumpling soup. That’s what a lot of Korean people do.”

Li’s innocuous remark upset one viewer: Hours after the segment ran, Li listened to the voicemail explaining that the inclusion of dumplings had caused the caller to “take offense,” because, as the caller argued, a white anchor would not be allowed to make a similar observation about the New Year’s Day food traditions.

“I don’t think it was appropriate that she said that,” the caller said of Li’s dumpling comment. “She’s being very Asian, and, I don’t know, she can keep her Korean to herself. Sorry. It was annoying, because if a white person would say that they would get fired.”

Li posted the video Saturday night, writing in a caption, “I’d love to say something back.” On the video, as the audio from the call plays, Li sips from a cup and lets her expression do the talking for her.


I’d love to say something back. pic.twitter.com/zrXgiwQbR9

While Li remained silent in the video, the message was clear — and as thousands retweeted and shared the clip, many added words of support and descriptions of their own New Year’s Day food traditions. Then Li added a two-word description to her Twitter bio: “VERY ASIAN.”

Soon, the same message was appearing in the replies and shares of the original video, which soon came to include a wave of solidarity from reporters of Asian heritage across the country.

Chenue Her, an anchor with Iowa ABC-affiliate, tweeted the hashtag along with a photo of him preparing an array of New Years dishes, writing: “Me being #VeryAsian with my big Hmong family this holiday: spring rolls, boiled greens and pork belly, Hmong pepper and so, so much white rice.”

The hashtag also caught the attention of Weijia Jiang, senior White House correspondent for CBS News, who tweeted that she is “Proud to be #VeryAsian” alongside Li.

“On New Year’s day Chinese people eat noodles to celebrate longevity, dumplings for prosperity, and whole fish as a hope for abundance, to name a few,” Jiang tweeted. “It is a joy to learn about traditions in other cultures.”

Celebrities also stood up for Li. Comedian Margaret Cho shared Li’s initial tweet, with Cho adding, “I’ll say it, give me her number #VeryAsian.” Actor and Star Trek icon George Takei repackaged the video in his own tweet, writing, “This is…something. 😮 Love all the #VeryAsian support online. 💕 That is how you respond to such ignorance.”

Amid the flood of support, Li and others noted that the caller is just one example of the racism experienced by more than just people with Asian heritage.

In this case, however, the caller’s racism is also revealingly ignorant: The caller’s attempt to argue that a hypothetical white news anchor would be “fired” in the same situation indicates they may not have even watched Li’s segment on New Year’s Day foods. As shown in the roughly 30-second segment itself, Li’s remark about dumplings comes at the end, only after she’s already gone down a list of greens, black-eyed peas, cornbread and pork. It was a moment where Li made her own station’s reporting more diverse by the addition of her experience.

Yet, for people like the caller, the notion that culture contains more than white people is seen as a provocation. One of Li’s colleagues at KSDK, Abby Llorico, tweeted Li’s video and noted, “Hate is real and we have much bigger issues to bring to the table, but this is proof: so many just don’t want to hear it.”

The racist caller may not have wanted to hear about other cultures and traditions, but her complaint against Li has resulted in just the opposite. As for Li, in a Monday interview with the Washington Post, she said, “I think what happened to me was ugly,” but continued, “I now see that call as a gift because I’ve seen the good in people in a way that I’ve never seen before. It inspires me to be better and to learn more as well.”

The positive effects of one racist caller continue to play out on social media, where #VeryAsian trended on Monday. Reclaiming the words intended for insult, people shared their favorite New Year’s Day traditions, special connections to their culture’s cuisine, and tips for grabbing the best dumplings in St. Louis.

In one of the hundreds of replies, a Twitter user had a question for Li: What she would say to the caller if given the chance?

Li responded, “Thank you for motivating me to be #extraasian.”


Thank you for motivating me to be #extraasian