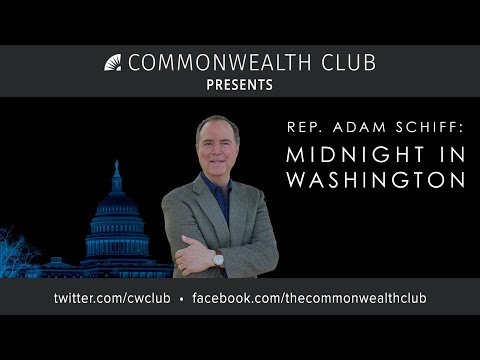 From the congressman who led the first impeachment of President Trump, Adam Schiff’s Midnight in Washington: How We Almost Lost Our Democracy and Still Could delivers a vital inside account of American democracy in its darkest hour.

Prior to the 2016 election, congressman Schiff had been sounding the alarm over the threat posed by a global resurgence of autocracy. As he led the probe into Trump’s Russia- and Ukraine-related abuses of presidential power, he came to the conclusion that the biggest threat to American democracy came from within—arguing that Trump’s presidency has so weakened our institutions and compromised the Republican Party that the danger will remain for years to come. From being a prosecutor to a congressman known for bipartisanship to a liberal lighting rod and archenemy of the president, Adam Schiff tracks his own path to meeting the crisis he argues is severely imperiling America: the dangerous appeal of authoritarianism.

Join us as congressman Adam Schiff deepens our understanding of authoritarianism in the Trump administration and warns that, even after his defeat, the unleashed forces of autocracy remain as potent as ever.

Adam Schiff
U.S. Representative (D-CA); Author, Midnight in Washington: How We Almost Lost Our Democracy and Still Could

The Commonwealth Club of California is the nation’s oldest and largest public affairs forum 📣, bringing together its 20,000 members for more than 400 annual events on topics ranging across politics, culture, society and the economy.

Founded in 1903 in San Francisco California 🌉, The Commonwealth Club has played host to a diverse and distinctive array of speakers, from Teddy Roosevelt in 1911 to Hillary Clinton in 2010. Along the way, Martin Luther King, Ronald Reagan and Bill Clinton have all given landmark speeches at the Club.

Why China and Australia compete for supremacy