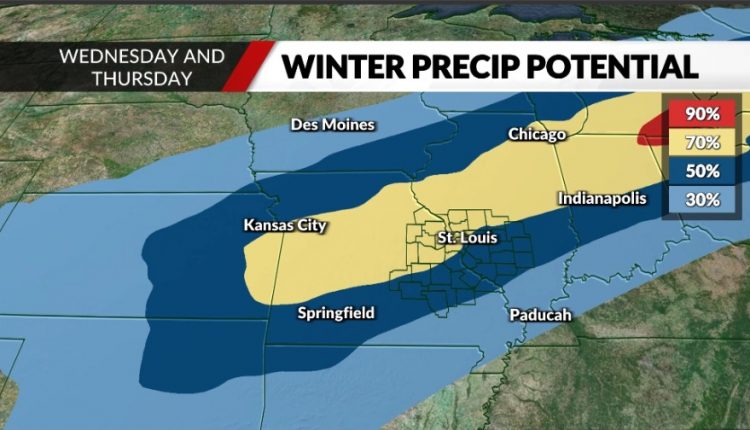 Possible chance of snow in St. Louis region next week


ST. LOUIS – A major winter storm may impact the region in the middle of next week.

The latest data continues to give growing confidence of a significant winter event with potentially major impacts to a large part of the Midwest starting late Tuesday night with a focus mostly on Wednesday into early Thursday.

In the maps shown below, the most likely area for all snow (or nearly 100% snow) is from northern Missouri into central/northern Illinois. Moderate to heavy snow will be possible in those areas.

Further south, including much of the Fox 2 News viewing area (outlined counties), there will be a fair amount of liquid rain on the front end of this system. The arrival of cold air during the day on Wednesday is expected to transition the rain to freezing rain, then sleet, and finally snow by Wednesday evening.

The region from southern Missouri into southern Illinois will start as rain and continue for quite some time. However, current indications are that cold air will eventually change the rain to freezing rain across the red shaded region Wednesday night with significant ice accumulations possible.

Then, late Wednesday night into Thursday, a change to all snow is possible with several inches of accumulation on top of the ice.

Keep a close eye on the forecast for the middle of next week. There will be fine-tuning and adjustments as the energy get closer and come into better focus.