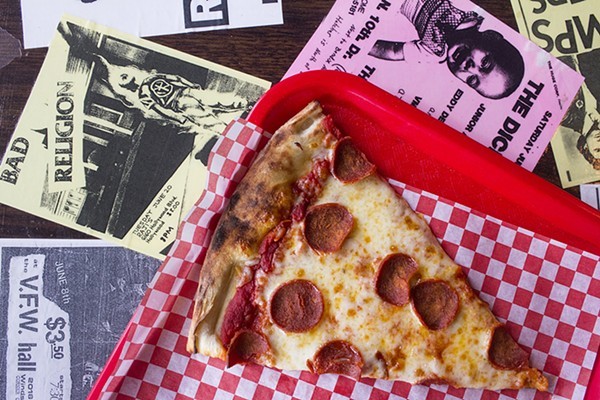 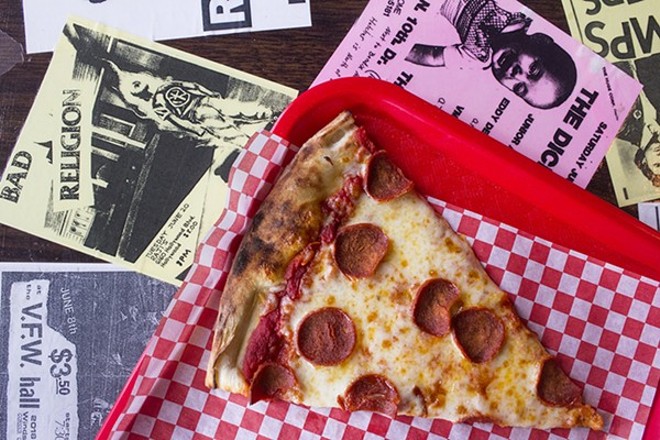 Pizza Head (3196 South Grand Boulevard, 314-266-5400), the irreverent, punk rock-inflected pizzeria known for its vegetarian New York style pies, has a new captain of its ship — two of them. The restaurant announced yesterday that it is now under new ownership. Scott Sandler, the restaurant’s founder, has sold the restaurant to Dylan Dodson and Sam Driemeier, who Sandler promises “will take it to the next level.”

In a Facebook post announcing the sale, Sandler thanked Pizza Head’s supporters and noted that he would be “taking an extended vacation after 8 successful years of 24/7 work.” He did not give reason for the sale and said he would not be leaving the industry but will transition to consulting work.

“I’ll still be demoing and lecturing at the Pizza Expo in March,” Sandler’s post reads. “I will also be consulting new and current owners in the finer points of maintaining a high profit margin while keeping wages high, as well as how to expand vegan options.”

As for what’s in store for Pizza Head, Dodson and Driemeier insist that the restaurant’s fans can rest assured that they will not be making any changes to the pizza they’ve come to know and love.

“We are thrilled to continue to serve you the delicious New York style pizza that you’ve come to love for the last 4 1/2 years,” their post on Pizza Head’s Facebook page reads. “We do not plan on taking anything off of the menu, but there are plans for some great (vegan) additions to the menu.”

Sandler founded Pizza Head in 2017 as a casual, punk rock answer to his more serious freshman effort, Pizzeoli, which he opened in Soulard in 2014. A former mortgage investor turned Neapolitan pizza obsessive, he became known for his exacting approach to the quintessential southern Italian pie form, as well as his ability make vegetarian and vegan options appealing to even the most devout meat-on-pizza eaters.

Dodson and Driemeier plan to carry on that philosophy, promising new vegan offerings, as well as expanded hours and dine-in service, when they feel it is safe to do so.

You can read Pizza Head’s entire announcement below.

“It is our pleasure to announce Pizza Head recently got new ownership. We are thrilled to continue to serve you the delicious New York style pizza that you’ve come to love for the last 4 ½ years. We do not plan on taking anything off of the menu, but there are plans for some great (vegan) additions to the menu. You will notice the hours expanding, and hopefully opening for dine-in service when we feel it is safe to do so. We live just a few blocks away, and look forward to serving our wonderful community!” -Sam & Dylan

Suspect in killing of Illinois deputy now charged in Missouri