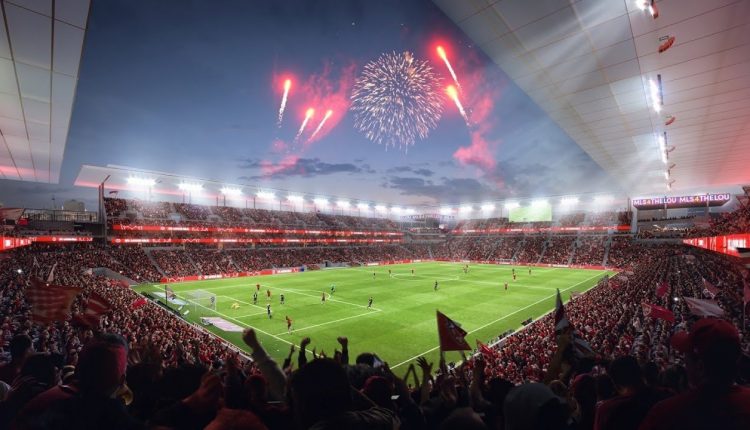 St. Louis City SC is a Major League Soccer expansion franchise that is expected to begin play in 2023. The club will be based in St. Louis, Missouri, with home matches at a planned 22,500-seat soccer-specific stadium
The stadium site, which eventually will be home to a 22,500-seat arena, training complex and team offices, sits just to the northwest of the city’s well-known Union Station and presently is “a massive hole in the ground,” according to St. Louis City SC owner Carolyn Kindle Betz. Workers also found a natural spring, she said. Perhaps that’s a good omen.
Besides building the stadium and club complex, St. Louis City has to design and fill out its corporate structure and front office; identify and assign roles and appoint a technical staff; figure out what to do about a reserve team and academy; and start marketing season tickets. Kindle Betz was awarded the team last August, and by this spring, there was a sense in MLS circles that St. Louis might be falling behind. Now with an extra year to prepare, the task list doesn’t seem as daunting.
The stadium remains on track to open in the summer of 2022. That would’ve been midway through the club’s inaugural MLS season, but last month the league announced a one-year delay impacting three of its four expansion teams. Charlotte FC now will enter in 2022, and St. Louis and Sacramento Republic will join up in 2023
The team will play in a 22,500-seat soccer-specific stadium located in downtown St. Louis that is expected to be the anchor of a 31-acre (13 ha) development area that will include team offices, training facilities, and commercial districts. This stadium is intended to revitalize Downtown West St. Louis by providing an urban hub open year round. The stadium is situated to connect Forest Park with the Gateway Arch and is intended to field 17-23 soccer games a year along with serving as a venue for concerts, high school sports, and much more. Updated renderings for the planned stadium were released on March 5, 2020. The design of the stadium is intended to connect the surrounding area and the downtown area together while blending with the neighborhood.

Pujols, Yadi, and Waino exit a regular season game in St. Louis together one final…

St. Louis soccer stadium is on hold due to damage from a city project