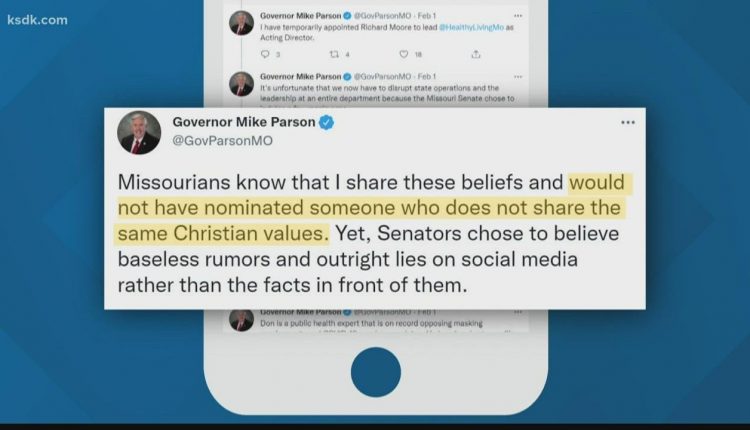 Missouri Gov. Mike Parson has no “litmus test for appointments,” his spokeswoman said Friday, despite a statement earlier in the week indicating he would only nominate a state health director who shared his “Christian values.”

The Republican governor, a Baptist, was angered after the Missouri Senate effectively ousted Donald Kauerauf as director of the Missouri Department of Health and Senior Services. Though Kauerauf opposes government mask and vaccine mandates and opposes abortion, hardline conservatives in the legislature questioned if he was conservative enough.

In announcing Kauerauf’s resignation on Tuesday, Parson wrote in a statement: “Don is a public health expert that is on record opposing masking requirements and COVID-19 vaccine mandates. He is outspokenly pro-life and morally opposed to abortion. Missourians know that I share these beliefs and would not have nominated someone who does not share the same Christian values.”

The statement prompted some to wonder if only Christians need to apply for top-level jobs in the Parson administration.

“I’m curious Governor, is this a standard you traditionally use?” Republican state Rep. Adam Schwadron of St. Charles wrote on Twitter. “Article VI of the US Constitution strictly prohibits a religious test as a qualification to any office or public trust. Considering that, I then must ask the question. Would someone who is Jewish, such as myself, be considered for nomination?”

But Kelli Jones, spokeswoman for Parson, said in an email that the governor’s statement “was intended to point out that Don Kauerauf shared values that aligned with the Governor’s and was not intended to imply that he imposes a requirement that job applicants adhere to any particular religion.”

Parson, Jones said, “has never required a religious litmus test for appointments as evidenced by the broad spectrum of religious backgrounds of his appointees. Just because an appointee happens to possess values that align with the Governor’s Christian faith doesn’t mean that he requires them to adhere to his religion.”

Jones cited as an example Parson’s appointment of former state Sen. Jamilah Nasheed of St. Louis to the state Board of Probation and Parole. Nasheed is a Democrat and a Muslim.

“I don’t believe he would ever make someone’s faith a litmus test to get appointed to a board or commission position, period!,” Nasheed said on Twitter.

“The governor’s remarks are offensive and undermine our nation’s promise of religious freedom, which is the fundamental right to believe or not, as we choose, and to know that our government will treat us equally,” said Rachel Laser, CEO of Americans for Separation of Church and State.

The Interfaith Partnership of Greater St. Louis, whose mission statement says it’s goal is to deepen “understanding, respect and appreciation among all persons across lines of religious difference,” expressed concern in an open letter to Parson.

“People of all faiths and no faith, in a variety of occupations and vocations, make significant contributions to our state and community every day,” the letter stated.

Rabbi Daniel Bogard with the Central Reform Congregation in St. Louis says he and others have filed civil rights complaints with the Department of Justice.

“I don’t have a sense of how far legally we can take this. But I’ll tell you, it’s incredibly insulting and scary as a religious minority in the state of Missouri to see the governor being able to flout the Constitution like this, to openly declare that Christian values are a requirement of governance in this state,” he said, “I think making it pretty clear that Jews and Muslims and Hindus and atheists and Buddhists and so many religious minorities in this state aren’t viewed by our governor as full citizens.”

Though United States Constitution does prohibit religious tests as a requirement for a government job, St. Louis University Law professor Anders Walkers says he does not believe this would qualify as a violation.

“An oath requiring employees to attend a service or to actually on their application, state their faith and then to prove the people have been denied employment based on their faith: that’s what will get you into court, not an offhanded comment by the governor, who is free to say whatever he wants and he can, he can even make religious statements,” said Walker. “That’s not a violation of the Sixth Amendment.”