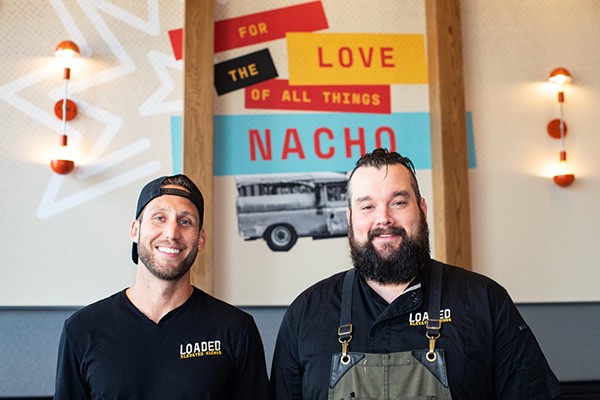 “It’s super flattering and exciting,” co-owner Brad Merten says in an interview with RFT. “I don’t always love to see myself on TV but it’ll highlight the dishes and the concept.”

Currently located in St. Charles, the nacho joint opened last year, and is from the same team that brought St. Louis Narwhal’s Crafted (two locations, including 1450 Beale Street #125, St Charles, 636-395-7315), an adult frozen beverage spot. The restaurant is expanding with a new Narwhal’s location set to open in the Grove in 2023.

Filming in St. Charles took one long day, about 7 a.m. to 7 p.m., Merten says, and the episode focuses on two of the unique nacho dishes they serve. The episode, titled “Smothered Comfort,” features “decadent dishes smothered in the richest sauces,” according to the Travel Channel’s episode description; it also teases that it will showcase other states’ burgers, biscuits and pancakes.

A Food Paradise producer called the store one day, inquiring if they’d like to be on the show, Merten says. The owner added he doesn’t know exactly how Loaded landed on the producer’s radar, but he said the producer was researching different concepts across the United States and thought Loaded stuck out.

“He loved the idea of what we’re doing and thought it’d be a nice fit for the episode, and he thought we’re a pretty unique take on nachos,” Merten says. “It was a quick process and a little bit surreal.”

Menu items at Loaded include the Toasted Ravioli, Banh Mi, Buffalo Chicken, Bar-B-Que Pork, Smashburger and more — they even have dessert nachos. View their full menu at loadednachos.com.

Merten is excited for the episode to premiere and thinks the dishes chosen represent both the store and St. Louis well. To find out what dishes made it on to the show, you can tune into the episode on the Cooking Channel at 9 p.m. February 16.

SEE ALSO: St. Louis Restaurants That Have Been Featured on Reality TV