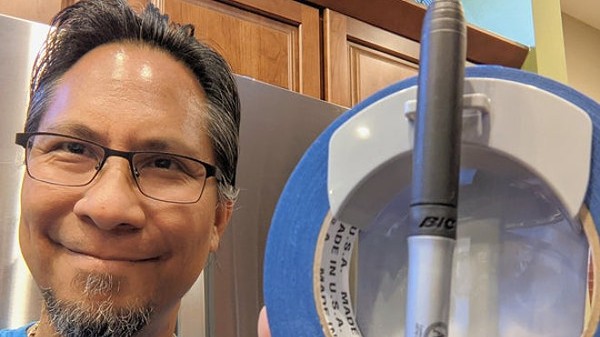 If Emmanuel Martirez has learned one thing since launching Kitchen Stickin’ in March of last year, it’s that kitchens around the country are filled with a common refrain.

“There are a lot of people out there yelling, ‘Where’s the tape?’ ” Martirez laughs.

Martirez himself uttered those words many times, which is why he dreamed up Kitchen Stickin’, a unique tool that makes the lives of professional and home cooks a little more easier and reduces food waste. The invention, a reimagined tape dispenser and marker holder that can be mounted to walls, refrigerators or cabinets, has already caught they eye of Olive + Oak’s Jesse Mendica, and acclaimed chefs, authors and bakers around the country.

Martirez, who hails from Shrewsbury, had no idea that his kitchen innovation would take the culinary world by storm when he came up with the idea a little over a year ago. A self-described home cook who prepares the majority of his family’s meals in order to save money and maintain healthful eating habits, Martirez became frustrated by the amount of food waste generated in his household and felt that there had to be a way to combat it. Taking a page from the play books of the restaurants he’d worked at in the past, Martirez began labeling his food with a roll of painter’s tape and a Sharpie. The impact on the waste was immediate.

“We’d make these meals, get done with them, shove them in the refrigerator, and they’d be promptly forgotten,” Martirez says. “We’d pull out all these containers of fuzzy food and not even remember what they were. I got tired of it. Once I started labeling the container, I was amazed at how much less food waste we were creating.”

At first, Martirez simply kept his tape and marker in a junk drawer, but that, too, had its problems.


“Our junk drawer was a mess,” Martirez says. “I’d always have to dig around in there, and of course kids love tape, so that was always missing.”

Martirez knew there had to be a way to keep the tape accessible and out of his kids’ reach, so he began sketching out some ideas. Those initial drawings morphed into a full-fledged innovation once he put them through a simple CAD program and eventually had a prototype made. The more he and his family used the invention, the more he realized he was onto something.

As word of his product spread through his network, he got more and more requests and officially launched it as Kitchen Stickin last March. Manufactured just off the Hill (each is stamped with “Designed in St. Louis, MO”), Kitchen Stickin has become a bona fide kitchen product phenomenon, catching the eye not just of Mendica, but of professional chefs and bakers from around the country, including the James Beard Award winning author Michael Ruhlman, who called Kitchen Stickin’ the “coolest new kitchen invention. Brilliant!”

Martirez believes Kitchen Stickin’ is resonating with people because of how convenient it is. He describes the tool as a “one-handed operation,” that makes using it easy.

He is also thrilled with its environmental and economic impacts. As he found out while doing research for the invention, the average family wastes two hundred pounds of food ($1,500 worth) every year. Further, food waste is the number one category of trash taking up space in landfills.

In that spirit, Kitchen Stickin’ also has a philanthropic component; for ever dispenser sold, he donates $1 to Feed America, an organization feeds the hungry with food that, while still wholesome and of good quality, would have otherwise gone unused. He is hopeful that, in his small way, he can be a part of the solution — and make people’s lives a little easier in the process.

“I know we’re not going to save the world with a tape dispenser, but if we can make even a little dent, that would be awesome,” Martirez says.