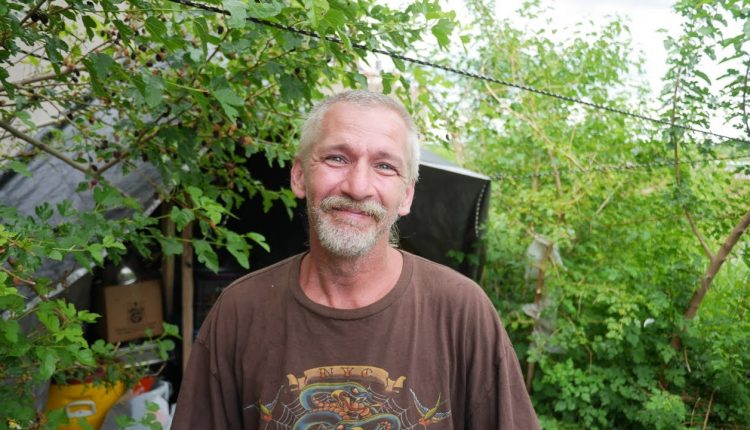 When I asked Wvlf if he is on Facebook, he pulled out his phone and added me right one the spot and to message me. This interview is a little old. I found a hard drive that I must have misplaced. Interesting that just this week, Wvlf messaged me on Facebook asking when I will be returning to St Louis.

The memory I cherish about first meeting Wvlf was a Facebook exchange we had while I was shopping in Walmart. It had rained really bad and of few of the tents in their tent camp were in really bad condition with many holes. Via social media and all of your help, we raised money to buy new tents and campaign gear. I would send a photo of a tent or a camping stove to Wvlf for approval. He would often instruct me not to purchase the most expensive items and just get what they need.

Wvlf did get into an apartment but he is back outside. It’s really awesome when a homeless person gets’s placed into housing but in many communities, there is a high percentage of people to go back to the streets!

Since its launch in November 2008, Invisible People has leveraged the power of video and the massive reach of social media to share the compelling, gritty, and unfiltered stories of homeless people from Los Angeles to Washington, D.C. The vlog (video blog) gets up close and personal with veterans, mothers, children, layoff victims and others who have been forced onto the streets by a variety of circumstances. Each week, they’re on InvisiblePeople.tv, and high traffic sites such as YouTube, Twitter and Facebook, proving to a global audience that while they may often be ignored, they are far from invisible.

Invisible People goes beyond the rhetoric, statistics, political debates, and limitations of social services to examine poverty in America via a medium that audiences of all ages can understand, and can’t ignore. The vlog puts into context one of our nation’s most troubling and prevalent issues through personal stories captured by the lens of Mark Horvath – its founder – and brings into focus the pain, hardship and hopelessness that millions face each day. One story at a time, videos posted on InvisiblePeople.tv shatter the stereotypes of America’s homeless, force shifts in perception and deliver a call to action that is being answered by national brands, nonprofit organizations and everyday citizens now committed to opening their eyes and their hearts to those too often forgotten.

Invisible People is a 501(c)(3) nonprofit organization dedicated to changing the way we think about people experiencing homelessness.