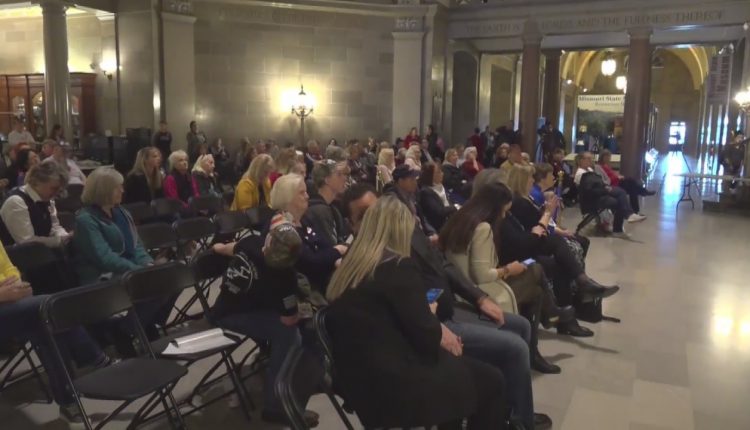 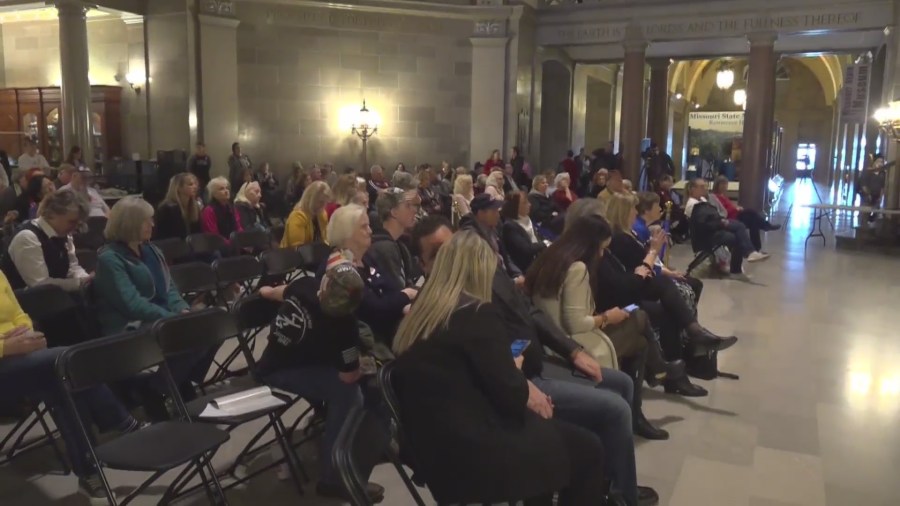 JEFFERSON CITY, Mo. — Leaders of the Missouri Senate say members are done debating a congressional map for now, but that didn’t stop dozens from rallying inside and even outside the Capitol Tuesday.

Demonstrators once again put pressure on senators to draw a strong Republican map. For the first time since the session started the first week in January, the Senate is taking up legislation other than the map. Members of the Conservative Caucus say the fight isn’t over.

“Right now, we are in a war, we are in a war to take back the U.S. House of Representatives,” said Sen. Denny Hoskins (R-Warrensburg). “Who wants to have Nancy Pelosi as Speaker of the House?”

The room of activists responded to Hoskins’ question by booing Pelosi. The goal of those attending the rally, a 7 Republican – 1 Democrat map.

“We’re not going home, and we’re not going to forget what’s happening here,” said Jefferson City resident Jodi Widhalm. “Keep supporting those who are fighting on behalf of us, who are listening to our voices, and follow through with what the people would have them do.”

Besides inside the Capitol, some demonstrators also used their cars and trucks to drive around the Capitol, American flags hanging from the vehicles and “7-1” painted on the side.

Members of the Conservative Caucus told those attending the rally that they are proud of the more than 50 hours they spent holding the floor last week.

“Every time, every single time that our leadership or that anybody has said we can’t get a 7 [Republican] – 1 [Democrat] map, our response has been the same, the filibuster goes on,” Sen. Bill Eigel (R-Weldon Spring) said.

Sen. Bob Onder (R-Lake St. Louis), a member of the Conservative Caucus, has also fought for weeks for a 7 Republican – 1 Democrat map and for putting the county he represents in one district, instead of being split by the 2nd and 3rd districts.

“You would think in a red state that Donald Trump won by 20 points, we could fight fire with fire, wouldn’t you,” Onder said.

Onder’s 7 Republican – 1 Democrat map was voted down last Monday night by an 8-24 vote.

Executive Director for Missouri Right to Life, Susan Klein, has also been pushing for a 7 Republican – 1 Democrat map.

“Don’t give up, your momentum is basically saying, senators, you work for us, listen to us and we want more conservatives to go to Washington,” Klein said Tuesday. “We need more conservatives, more Republicans in Washington to stop the Pelosi agenda.”

Over the last several weeks, we have watched as business critical to MO citizens has been delayed by a small group of senators willing to send our congressional map to federal courts if they do not get districts that suit their ambition. Let us be clear – we will continue to do everything possible ensure a small group of self-interested Senators don’t give left-leaning judicial activities full control over our redistricting process. These Senators are also standing in the way of critical policies Missourians are asking for – election reform, banning Critical Race Theory, providing more choice for Missouri parents, the list goes on. To further complicate the Senate’s task, in the last 48 hours the Missouri congressional delegation has engaged with members of the Senate over redistricting. For the time being, we will step away from this debate on the senate floor. It is my hope that the congressional delegation will work to unify rather than divide and be part of the solution and not just add to the problem. It is past time for everyone involved to put the best interest of the state above their own political ambition.

The map still on the table for Senators is 6 Republican – 2 Democrat, similar to what the state has in effect now. Senate Minority Leader John Rizzo (D-Independence) and Rowden both believe they have enough votes for the map that passed out of the House but haven’t been given the chance to pass it.

Onder feels Senate leadership is leaving the Conservative Caucus out of negations and wants Rowden to rethink his leadership position. He said he was disappointed in Rowden’s tweet, saying he was blaming the issues on others.

When the upper chamber convened Tuesday, it was back to business. The Senate brought up a bill that’s Gov. Mike Parson’s priority, a bill expanding the state’s Fast Track Workforce Grant Incentive Program. But once again, some members started filibustering that move.


Will former President Donald Trump endorse someone in the Missouri U.S. Senate primary?

Across the aisle, Rizzo also agrees with the move Rowden is making, saying it’s time to take a step back.

“I think that some of that will carry over into whatever the next piece of legislation is,” Rizzo said. “How much of it, I don’t know but I would say people are pretty raw from last week, emotions ran pretty high, attacks got pretty personal.”

He said this puts Democrats in an awkward position, as Republicans work to fix relationships among themselves.

“I definitely think that it may be time to move on for a bit, but at some point, maybe go back to it,” Rizzo said.

Filing for the November election is a week away, Feb. 22. And without a map, congressional candidates would not know the exact lines of the district they want to run in. Rizzo has previously said if the Senate doesn’t pass a map and send it to the governor for approval, it could be in the hands of the courts.