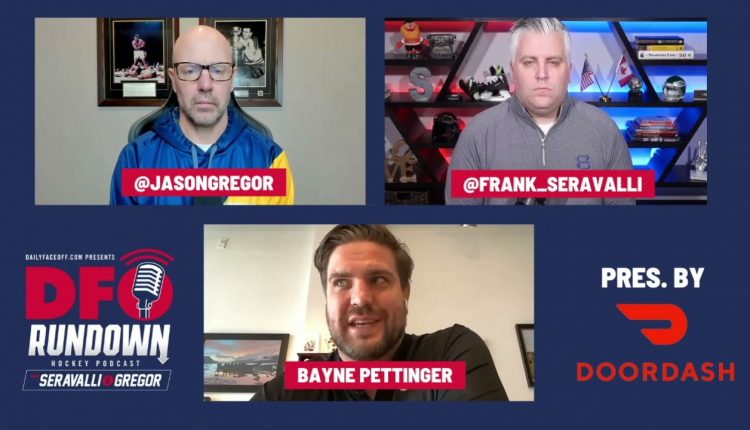 Bayne Pettinger's story of coming out as gay

Welcome to another Friday edition of The DFO Rundown with Frank Seravalli and Jason Gregor! On today’s show, Frank and Jason were joined by NHLPA Certified Player Agent Bayne Pettinger

Bayne is the first openly gay NHL agent after coming out just over a year ago. He spoke about breaking barriers, the support around him, and his new non for profit with Brock McGillis. Bayne also discussed his career with Hockey Canada and his experiences at tournaments like the Olympics.

Also on the show, two major NHL markets in Canada, the Montreal Canadiens and Edmonton Oilers, relieved their head coaches this past. Montreal opted to go with the inexperienced coach in Marty St Louis while Edmonton promoted their AHL head coach Jay Woodcroft. The most significant difference between the jobs is the pressure. Frank and Jason discussed the two new appointments.

Finally, Liam Horrobin joined the guys for a new edition of Buy or Sell presented by DoorDash. Are the Edmonton Oilers a playoff team? Is Tomas Hertl staying with the San Jose Sharks? Is the Arizona Coyotes decision to play at Arizona State University actually a good idea? Frank and Jason answer those questions and more in that segment.