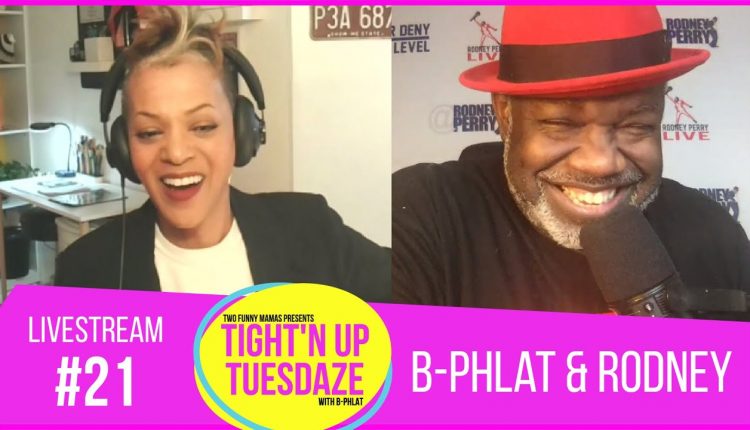 Subscribe: http://rebrand.ly/TwoFunnyMamas
Rodney Perry joins B-Phlat to play air guitar, check out Phlat’s Pheature from Philly, and dive into B’s latest projects. NOTE: The original livestream experienced tech issues, so the updated release is here. Sorry we missed all the B-Casso’s and HE-Casso’s on the live! Let B know you’re still here and leave a comment.

As the self-proclaimed “Baby Hair, Super Fresh,” with respect to her trademark “sassy mohawk,” B-Phlat’s personality is as funny as her comedy. With high-profile appearances on TV Guide Channel’s series “Stand-Up in Stilettos,” Nick Jr.’s “Nick Mom’s Night Out,” HBO’s Def Comedy Jam and Showtime’s “Comics without Borders,” B-Phlat has been universally spreading her own unique blend of brassy, sophisticated humor. In 2009, B-Phlat showcased on several stages at the Just For Laughs Montreal Comedy Festival.

This St Louis native developed her tenacity and wit at an early age, but by no means was a “class clown”. In 1992, B-Phlat relocated to Philadelphia for graduate studies in Arts Administration at Drexel University, where unknowingly, her friends signed her up for a talent show that launched her comedy career. She hasn’t looked back since and continues to draw her growing audiences into her funny tales of life, love and everything in between.

B-Phlat’s list of television appearances also include STARZ Channel’s Martin Lawrence Presents “1st Amendment Stand-Up Comedy,” The Travel Channel’s “Meet Me in St. Louis with Cedric the Entertainer,” Byron Allen’s “Comics Unleashed” and BET’s “One Mic Stand hosted by Kevin Hart.” She also co-hosted with Kenny “Baby Face” Edmonds’ “Where Music Meets Film” at the 2007 Sundance Film Festival, landed a spot on BET’s “Comicview” for 6-years running, and has appeared on VH1 as a clip show commentator on numerous occasions.

When she’s not spreading her humor on the screen, B-Phlat continues to tour extensively throughout the world. She has performed with renowned comedians including Cedric the Entertainer, Mike Epps and Paul Mooney. She toured on the Thomas Miles (Nephew Tommy, Steve Harvey Morning Show) “I’ve Got People Inside My Head” tour. She served as both host and headliner for 10 years on the RJE Comedy Cabaret College Tour, which is the largest, highest grossing, and longest running comedy tour catering to colleges and universities in the nation. In September 2006, Morning Dew Pictures produced her innovative, one-woman show, St. Philly-My Black Utopia and 1-hour comedy special “Sophisticated Ignorance.” To balance out her hectic life and schedule, B-Phlat is an avid runner and yoga enthusiast.

Two Funny Mamas is hosted by Emmy Award winning host, comic, actress and New York Times best-selling author Sherri Shepherd and host, comic, Emmy Award winning actress and author Kym Whitley. As powerhouse comediennes and longtime friends, Sherri and Kym have been making each other – and audiences around the world – laugh for more than 25 years. The duo joined forces in stand-up for their Ladies Night Out comedy tour, which played to sold out theaters and arenas across the country. Also, to the delight of their fans, since 2015, Sherri and Kym have shared their love of laughter as co-hosts of the #1 R&B syndicated radio program, “The Tom Joyner Morning Show.”

Sherri and Kym blend their comedic power every Thursday at 12pmPT to deliver a podcast that speaks to culture, sisterhood, moms and working women everywhere. Nothing is off limits when these two funny ladies get together to talk about life, love, motherhood, singleness, relationships, dating, pop culture, sex [or the lack thereof!] and everything in between. Raw, unfiltered and funny. That’s what audiences can expect when Two Funny Mamas, Sherri and Kym, get on the mic!

St. Louis Standards: At the Crossing, a Symphony of Details Adds Up to Success | Food & Drink | St. Louis | St. Louis News and Events

HOW MUCH DOES VAN LIFE COST?! | Monthly expenses breakdown