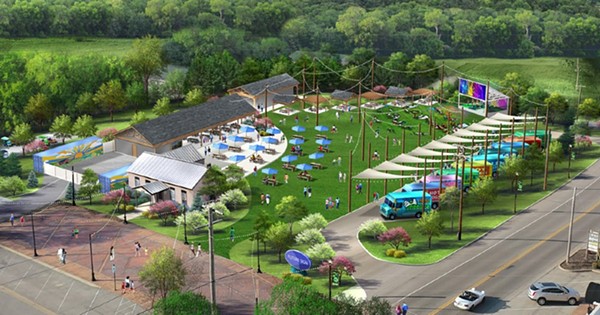 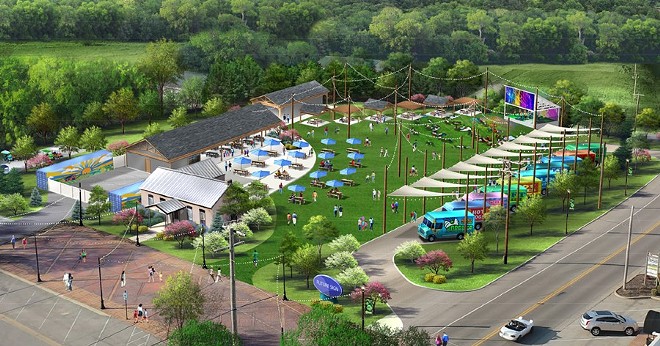 St. Charles County will soon have a shiny new food truck park, courtesy of the team behind 9 Mile Garden. Frankie Martin’s Garden (5372 St. Charles Street, Cottleville), a sprawling dining and entertainment complex, is slated to open this spring in Cottleville, promising food, drink, music, recreation and more for the area’s residents and beyond.

According to Brian Hardesty, managing partner for 9 Mile Garden and Frankie Martin’s Garden, launching multiple outlets of their food truck park concept was always part of the conversation, even before they opened the Affton location in the summer of 2020.

“We had talked about the possibility of having multiple locations when we were talking about the 9 Mile Garden concept, so it was always an idea that we were open to, especially if the right circumstances presented themselves,” Hardesty says. “We’ve had some real success with 9 Mile Garden over the past two years, and now, going into our third season with a great lineup of trucks and good community feedback, we were like, let’s do more of these.”

Named after Frank J.Martin, a beloved, longtime Cottleville resident who passed away in 2020, the new food truck park will build on the success of 9 Mile Garden while establishing a unique identity. About an acre larger than its sister concept in Affton, the Cottleville venue takes up 2.74 acres — a sizable footprint that will allow for sprawling pavilions, a live music stage, pickle ball courts, a 26′ LED wall displaying movies and sporting events, a beer pavilion, a dedicated golf cart parking lot and a whiskey and wine bar housed in Martin’s 150-year-old former residence.

“After Frankie Martin passed away in March of 2020, some of the partners [in 9 Mile Garden] knew him personally and thought this could be a super cool thing to honor his memory,” Hardesty says. “By purchasing the property, we could make it a place where the whole community could come together and celebrate daily.”

As Hardesty explains, once Cottleville came on the radar as a potential location for 9 Mile Garden’s sophomore effort, he and his partners jumped at the opportunity. Because of its historic downtown filled with independent businesses and a close-knit community feel, he is confident that the area will embrace Frankie Martin’s, and he’s excited to be a part of helping to define the Cottleville’s growing dining and entertainment scene.

“Old Town Cottleville is nothing but independent businesses; all of those places exist there and are wonderful,” Hardesty says. “We thought that fits in with what we like to do— feature independent businesses and give them a venue to be successful. Currently, we are at 27 food trucks as members of this location, so that is 27 new businesses that people can visit every day. I think that is super cool.”

To that end, Frankie Martin’s will have its own distinctive feel separate from 9 Mile Garden. Though the two will share the same concept — a lively, mostly outdoor multi-use entertainment space anchored by a rotating lineup of food trucks. Hardesty is eager to see the new Cottleville venue develop its own unique personality. He believes the additional space and new attractions will help it achieve that.

The new park’s initial lineup of trucks include such established favorites as Doggie Mac’s, Wayno’s, U Kraft and Supersmokers, as well as newer brands. One of the most hotly anticipated trucks, BEAST Craft BBQ, represents revered barbecue heavyweights David and Meggan Sandusky’s first foray into the world of mobile cuisine. Hardesty is also excited about the park’s extensive beverage offerings, including the whisky and wine bar, which will include over 200 different labels of whisky and both wine by the glass and bottle service.

Frankie Martin’s will be open seven days a week from 11 a.m. until 2 p.m. for lunch; 5-9 p.m. for dinner; 10 a.m.-2 p.m. for Sunday brunch and late night for drinks and entertainment as business dictates.

“We took a lot of people by surprise when we announced we were doing 9 Mile in Affton, but we couldn’t have been more happy with the property and the way it’s gone,” Hardesty says. “We couldn’t be more excited about this one, too. There is a lot to be added to the area, and hopefully, we will make that picture more complete.”